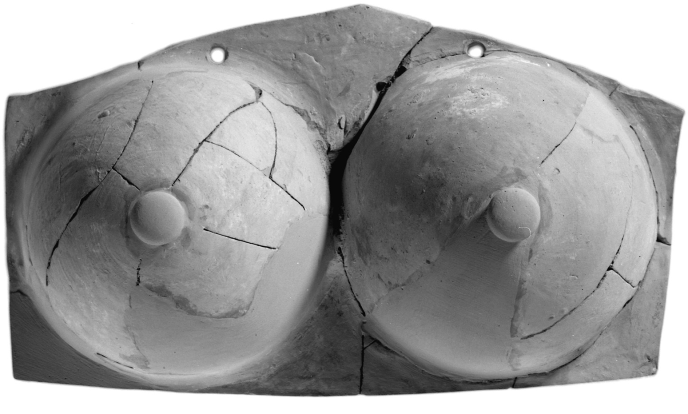 For over two thousand years, a phenomenon took hold in the ancient world, from the Levantine coast of Phoenicia to the rainy fields of Somerset. In sanctuaries and temples, anatomical votives were dedicated to a range of different deities, calling upon their healing powers. These anatomical votives have been found in their hundreds, among them hands, feet, eyes, noses, breasts, ears, penises and uteri.

Votive breasts occupy a significant percentage of these ex voto objects in the ancient mediterranean and beyond. Despite this exciting abundance, research, and especially images, are hard to find beyond the brief footnote. This lack of images, however, does not reflect a particular scarcity or mundanity of these objects.

As we shall see, votive breasts vary across time and place, be that in their materials, inscriptions, technology or use. In most cases, they can be identified with a deity through their context, such as a temple or shrine. These are often local deities associated with fertility, sex, reproduction or healing. In many cases, however, we are left to guess.

The earliest example I could find is a rare marble votive carved in the shape of two breasts, thought to be from Canaan, a region in the Near East equivalent to modern-day Lebanon and Syria, occupied during the 2nd millennium BC by the people known to the ancient Greeks as the Phoenicians. This would date the object to c. 1500-1000 BC, a good thousand years earlier than the rest of my examples. The object can be yours for the price of just 1800 US dollars, according to artemission.com, an online antiquities dealer. Unfortunately the provenance of this object is unknown: it seems to have appeared in Lebanon in the 60s where it was snatched up by a certain Mr Kabaz, most likely a collector. The object is carved from marble, finished smoothly on the front with defined edges.

The item is listed as “Breasts of Astarte”, although no inscription or greater contextual information is provided to support this claim. Astarte is the Hellenised version of Astoreth, a goddess worshipped in the ancient Levant. She was associated with fertility, sexuality and war, and was often equated with Aphrodite/Venus in Classical Greece and Rome. Many sculptures of the goddess depict her holding her breasts, presenting her as a symbol of fertility. If this votive object is rightly associated with Astarte, it probably implored the goddess to increase fertility or lactation to assist breast-feeding.

Just how typical is this of the traditions we find emerging across the ancient world in the following two thousand years? Like the breasts of Astarte, votive breasts from most of the Greek world, including Athens and Aphrodisias tend to be made of marble. In Athens, votive breasts have been found in the Agora, Asklepion, Amyneion, the Sanctuary of Zeus Hypsistos and the sanctuary of Artemis Kalliste. The votives do not all date to the same period, but all are of fine-grain white marble. 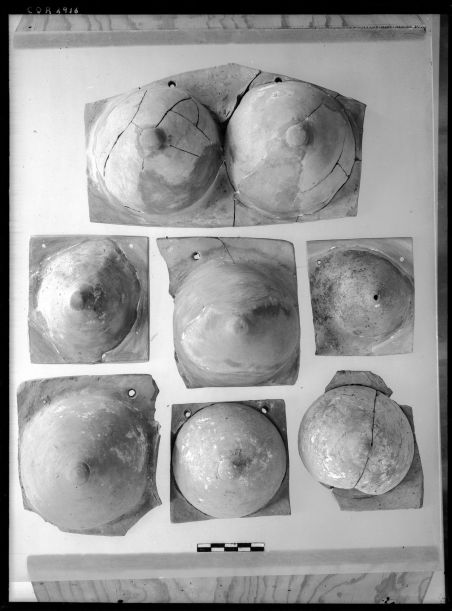 Contrast this with the evidence found at the temple of Asklepios in Corinth, shown here. From the damage visible on the votive objects – many of which have been heavily restored – it is clear how different these votive breasts are. Unlike Athens, the area surrounding Corinth lacked a good supply of marble and its import would have been laborious and costly. As a result, a parallel tradition developed in Corinth, using clay to create mould-made terracotta votives. The terracotta was then often covered in a slip.

Corinth is known for its pivotal role in the development of terracotta technologies. Indeed, Pliny writes that “it was through the service of that same earth that modelling portraits from clay was first invented by Butades, a potter of Sicyon, at Corinth,” referring here to the tradition of terracotta sculpture (Pliny NH 9). Votive terracottas have been found at the Asklepieion in Corinth dating from the last quarter of the fifth century to the last quarter of the fourth century BC.

This variation in material affects more than just the appearance of the votives (or their tendency to break). Terracotta was shaped from moulds rather than hand carved, making it cheap to mass-produce and accessible to a wide range of Corinthians, not just those who could afford marble. This means of production also points towards the generic appearance of the votive breasts, which were perhaps sold to visitors outside healing temples. The votives are not inscribed or personalised, as we find elsewhere, but would probably still have been used by an individual for any specific ailment or prayer. 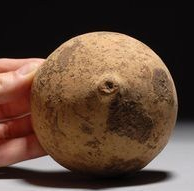 Etruria, an area of central Italy, including modern-day Tuscany, Umbria and Lazio, is also known for its vibrant votive tradition. The Etruscan civilisation occupied this part of Italy from around 700BC until its colonisation by the Roman Republic, which began in the late 4th century BC and continued until around 100BC. Etruria had its own pantheon and terracotta votive tradition, similar to that found in Corinth. Unlike the Corinthian examples, which were mounted on plaques and hung on the walls of the sanctuary of Asklepius, most Estrucan votives were not designed to hang on walls.

Etruscan sites have yielded a large amount of votive breasts. To give some context, 85 were found in Tarquinia, 5 in Graviscae, 3 in Veii, 15 in Vulci and 10 in Tessenaro. Paradoxically, this abundance has meant that photographs are especially hard to find, and finds are often not catalogued or researched; votive breasts are just too commonplace.

An interesting case comes, quite surprisingly, from the Temple of Sulis Minerva at Bath in Somerset, probably from the late 1st century AD. Unlike our other examples, it is made from ivory cut from an elephant tusk, a valuable and exotic material. The presence of ivory not only highlights the connectivity of Bath during this period, for ivory probably came from North Africa, but also sets this votive breast apart from the others. Its luxurious and expensive material points towards the wealth of its donor and suggests a one-off dedication, rather than a fully-developed votive tradition. 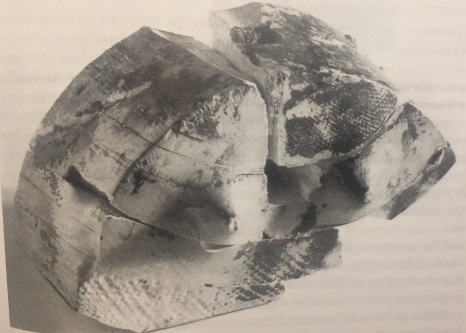 Sulis was a local celtic goddess worshipped at the thermal spring. With the Roman invasion of Britain, beginning in AD 43, the Goddess was assimilated with Minerva, becoming Sulis Minerva, and the site was known as Aqua Sulis by its deity. Here, she is surely invoked in her capacity as a healer and appealed to with a luxurious ivory votive.

As this case suggests, many of the healing deities invoked by these breasts were local gods or goddesses, associated with springs, shrines or temples. Astarte in Canaan, Sulis at Bath and Asklepios at Athens and Corinth are all closely woven into the pantheon or healing tradition of their location. Many seem to occupy similar roles within different societies, associated with fertility or medicine. Etruscan deities Uti and Turan are notable receivers of votive breasts and appear to have been venerated in a manner similar to Aphrodite/Venus and other deities of fertility, sex and reproduction. Uti was the supreme goddess of the Etruscan Pantheon and Turan the goddess of love and fertility. Elsewhere in Etruria, specific deities are impossible to pin down, as many local altars lacked inscriptions. 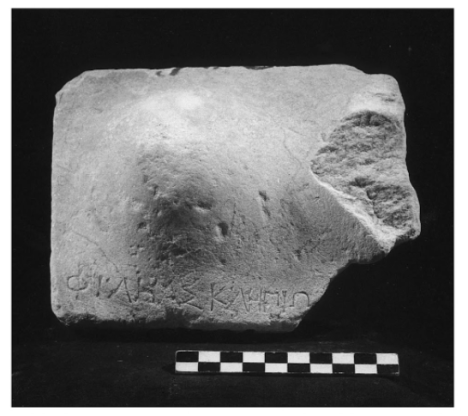 In 420/419BC, the cult of Asklepios, a deity associated with medicine and healing, was imported from Epidauros to Athens. In the midst of the Peloponnesian war, Epidauros’ coastal location would have been strategically important for Athens, and the establishment of the cult probably developed out of a short-lasting political alliance. The cult was soon moved to its permanent home on the southern slope of the Acropolis and invited a strong tradition of ex voto offerings, mounted on the walls and surrounding the sanctuary. Plenty of votive objects have been found at the site of the cult, including the fragmentary votive breast from the 4th century BC pictured here. The inscription records a dedication, Phile Asklepio, Phile to Asklepios, highlighting the personal nature of the dedication. Perhaps Phile’s complaint, directed to the god of healing, was more likely pathological, but that’s only a guess.

Inscribed votive breasts have also been found at the site of Aphrodisias, a Roman city in modern-day Turkey. This votive object has been dated to the 2nd century AD by the lettering of the inscription. Whilst the original location of the votive is unknown, the inscription above the breasts provides more details. It reads:

This is one of three dedications of votive breasts made at the sanctuary. One was made by a certain Dionysios, on behalf of Ammia, apparently his wife. The other is the dedication of Eugenia, with the inscription: ‘to Asklepios who listens to prayers well: Eugenia dedicated (this) in fulfilment of a vow.’ Unfortunately, neither have been photographed.

The anatomical votives from Aphrodisias, these breasts included, are distinct from the Athenian example in that they are made by individuals in fulfillment of a vow, presumably after they have recovered from their afflictions. Without a patrynomic to associate the individual with their ancestral family, the votives appear remarkably personable. Contrast this with the mass-produced votive breasts from Corinth and Etruria.

One large gaping question emerges from this overview of votive breasts: what were they used for? Unfortunately is it a question not easily answered, for even the inscribed votive breasts omit the cause of complaint. Suggestions have included breast cancer and mastitis, but increased lactation, fertility and easy childbirth are also likely contenders. But healing deities were not doctors, diagnosing symptoms or providing explanations, they were – importantly – still gods and goddesses, to whom prayers for cures and hopes of recovery were directed.